Lack of organization and standardization of supplies, both common problems in many healthcare facilities, were some of the problems Ben Haskell encountered when he took on the job as the Manager of Supply Chain Operations at a 400-bed hospital. Complaints from nursing staff, reduced staff, and excessive supply assessment times drove the need for change. Haskell realized the facility needed to implement a whole new system to organize and standardize supplies while reducing costs and improving employee and patient satisfaction. That’s when he turned to Metro. 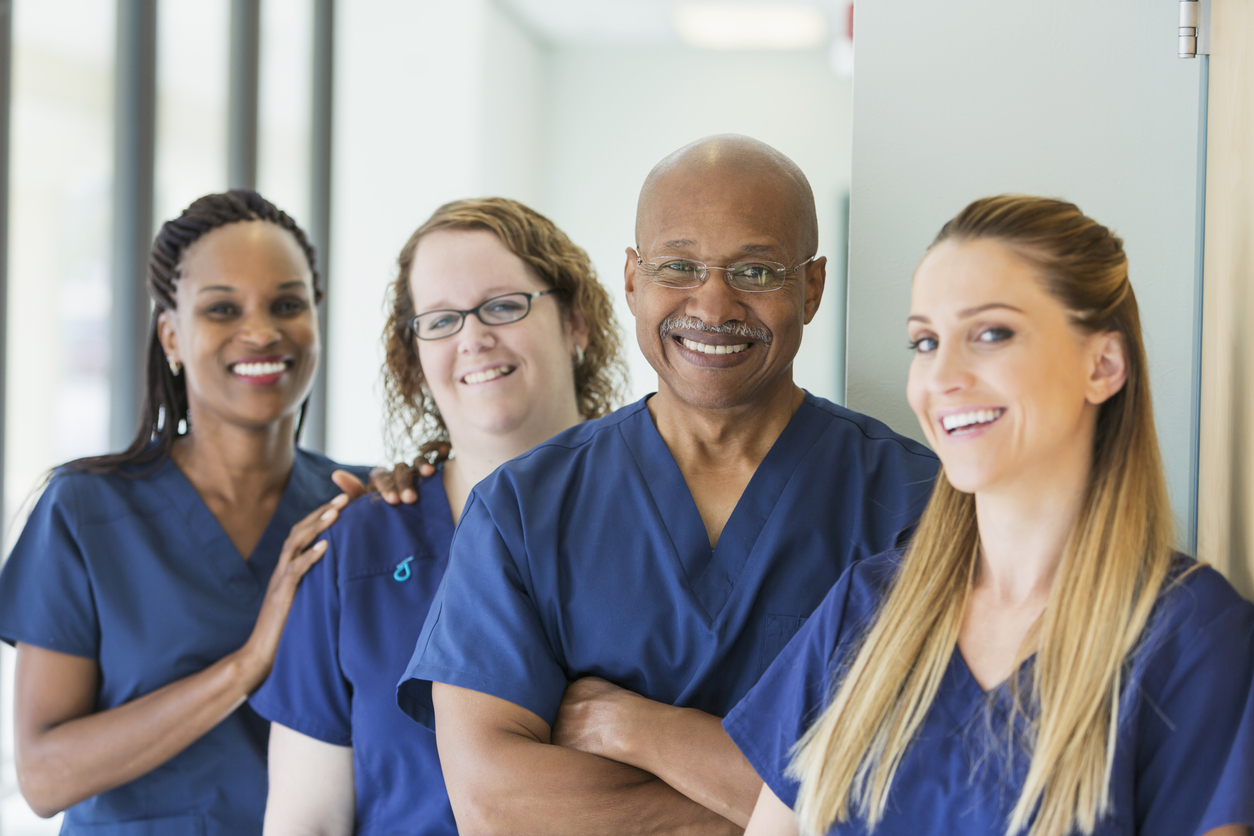 When Haskell moved up from supervisor to the Manager of Supply Chain operations, he faced some big challenges. Supply management on the inpatient side and in the facility’s OR suites required some big changes. He was dealing with complaints from nursing staff on inventory, and simultaneously was faced with a reduction in money for staffing and tasked with reducing costs even further. Haskell was faced with the unenviable, but all too common, task of “do more with less.”

Haskell noted, “Every supply room on the inpatient side was different. There were different color bins, linen carts, regular carts, carts with adjustable shelving, different types of bins, different sizes, and different heights. It really was a hodgepodge. Nothing was standardized. One of the biggest things we weren’t doing was maximizing the square footage. We had major gaps between shelving. We weren’t right sizing bins. It was a very poor inventory management system that we were using, and that’s where the majority of our problems were at.”

The OR suites in the facility had their own challenges with supply management. “I was called into a meeting with the OR director, and we had issues with nurse work. In the OR suites, we had no standardization. Every suite was different. One of the biggest issues that nurses had in the OR was not knowing where supplies were at because they were different in each room,” said Haskell.

Faced with a two-part challenge that encompassed both the inpatient side and the facility’s OR suites, Haskell knew they needed a new system, but it had to be one that would be cost-effective and right for the environments – inpatient areas and busy OR suites.

Haskell studied Kanban systems in college, and he knew they offered the organization, standardization, and cost-saving benefits the facility needed, so he approached the CEO with his plan. “I explained that we could save a lot of dollars in labor when I approached the CEO. I told him that if you want to run lean, you have to have a good supply management system in place.

Along with implementing a Kanban System on the inpatient side, Haskell decided to use Metro’s Starsys enclosed carts along with the two-bin Kanban System in the OR suites. He commented, “We had been using Metro as our preferred vendor for a long time, and Metro’s sales rep was our go-to guy when we needed carts and bins.”

Implementing this new solution took some time. “It’s a very time-consuming process. The more tedious parts of the project are the computer work, your data, and obviously, the labeling, which is extremely time-consuming and tedious,” said Haskell. But despite taking some time to get the new solution in place, the new two-bin system, along with the Starsys enclosed carts for the OR, quickly began to pay off.

The new system standardized supply rooms, allowed the inpatient side of the business to run leaner on supplies, increased patient care time for nursing, and reduced the workload for Haskell’s supply chain team. Implementation of the new system resulted in other benefits:Originally, the inpatient supply rooms were completely disorganized, with different types of shelves and different types of bins in place. Square footage wasn’t maximized, and time was being wasted on assessments and replenishing. Haskell started with a bin stack Kanban system and eventually moved to a

back-to-back two-bin Kanban system for the inpatient supply rooms. Focusing on ordering bins of the same height helped avoid the waste of vertical space – bins were all the same height and depth, but could be different widths to make the most of the available space. Metro’s Super Adjustable shelving made shelf levels easy to reposition as the racks were filled with bins and supplies.

Supplies were well-organized and arranged in the same location in every storage area, resulting in less time spent by nurses hunting for supplies, which freed up more of their 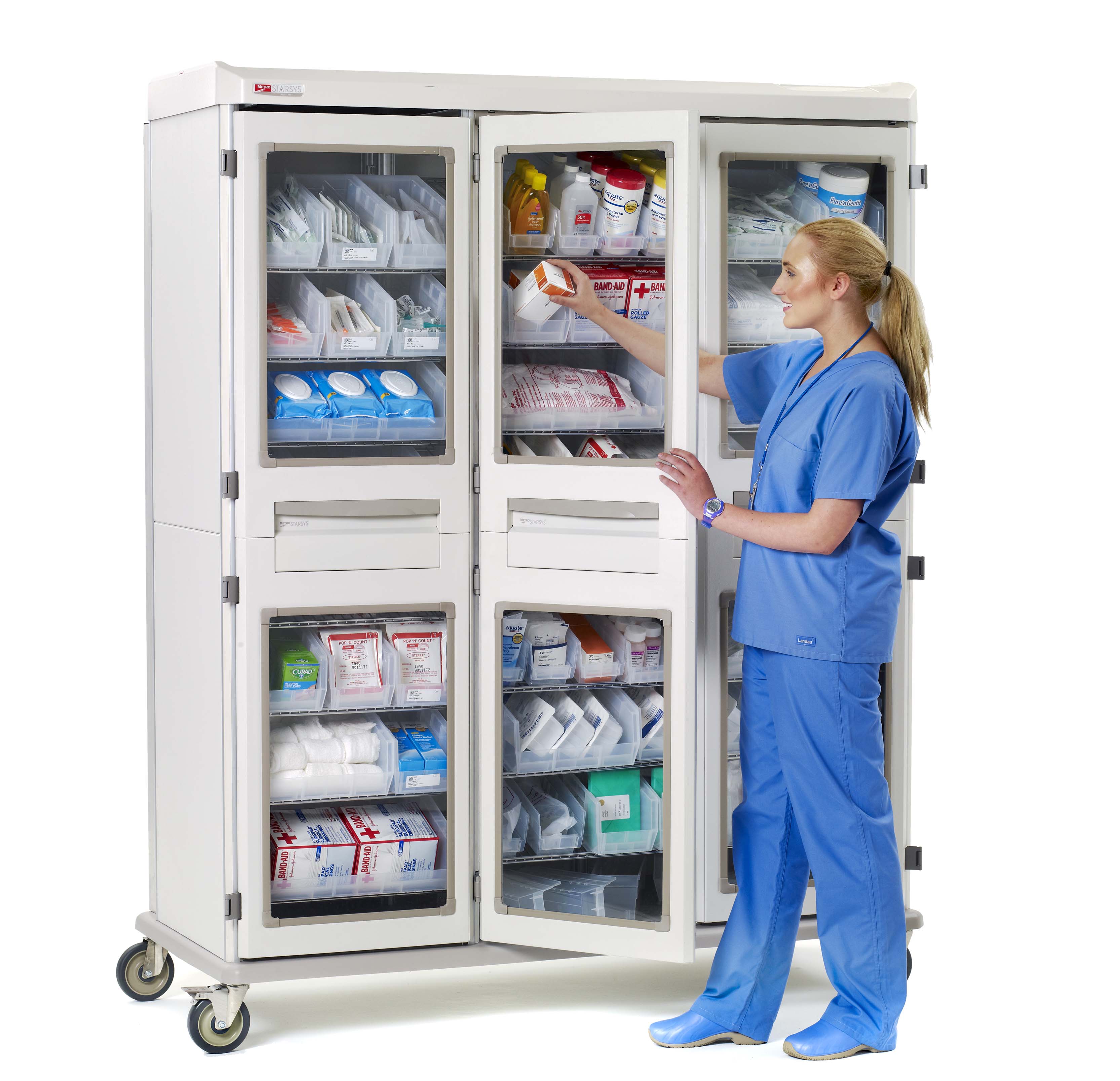 Two-Bin Kanban System with Starsys Enclosed Carts in OR Suites

On the surgical side, Haskell presented a two-bin style inventory system that was housed in a Starsys enclosed cabinet with see-through, plexiglass doors. Nurses had complained that they never knew where supplies were in the OR suites because they were different in each room. The new system not only standardized the supplies available in each OR suite, it provided protection for supplies and offered easy availability of “one-minute supplies” by making it easy to see and identify supplies quickly through the plexiglass doors.

Once the system was in place, “Nursing loved it. They spent less time looking for product. They knew what was in every OR suite. The Starsys carts offered improved mobility in the OR, and visibility also made a big difference…The feedback was so good that they wanted us to start using two-bin KanBan systems in the OR supply rooms.”

The new OR system also made a huge impact on assessment times. “We did time studies before the project and time studies after the new system was completed. For the OR project, our assessment times went from between 18-20 minutes for a single OR suite to just 20-40 seconds per OR suite after implementing the KanBan system with the Starsys enclosed carts,” reported Haskell. That’s an 18 ½ minute savings per OR Suite, or nearly a 7-hour reduction per assessment of the 22 ORs, a 3800% improvement.

Partnering with Metro, Haskell was able to use the two-bin Kanban system, along with Starsys enclosed carts in the OR, to not only organize and standardize supplies, but to improve nurse efficiency and satisfaction, more easily gauge and distribute workload, decrease inventory dollars on hand, and significantly decrease supply managements FTE requirements and labor costs.

Haskell talked about the big benefits of the new system, mentioning, “Staff is the number one expense for a healthcare system, and one of the main selling points of a two-bin Kanban system is a decrease in labor. Total dollars on hand can also be decreased while maintaining fill rates and keeping service levels high. Employee and customer satisfaction are also big benefits that healthcare organizations can enjoy with a two-bin Kanban system.”